After a really productive August, September just went downhill. It took me nearly half the month just to finish a handful of outstanding blog posts, never mind actually starting any new projects.

And it’s not even creative block or lost mojo. I have plenty of ideas for things I want to make and experiments to try.

It’s my focus I’ve lost. I simply couldn’t get started on anything. It’s like, if I stop and think about anything, that’s it, no chance I’ll do it. The only thing I made in the first ten days was a hand-carved stamp and that only happened because I was doing a bit of tidying, came across the piece of rubber, remembered I was going to see if it would carve reasonably, grabbed the lino cutter and started work on it. And then I got over-enthusiastic on the paper I’d been testing it on and ended up making something that I thought would work nicely as a background for an art journal page.

So that’s what I did with it. After another ten days of doing absolutely nothing crafty, I decided that I just had to bite the bullet and do something. A bit more tidying up to make some space revealed my art journal and so I set up my phone to take some process photos for a change — even though I had no plan in mind — and grabbed some supplies. And this is what I did…

A rough layout. It’s all well and good having no plan, but it does help to arrange a few scraps to give you a starting point. Glue down the base layer. And then add a few extra bits to make it more interesting. And yes, the central piece of music paper is torn: after careful planning and even marking where it should be on the page, I immediately glued it in completely the wrong place and by the time I realised why it didn’t look right, it only just pulled back off again. But this is a mixed media collage and it didn’t matter in the slightest — it’s just a bit more texture.

And even it out with a bit of gesso. An uneven layer of white gesso helps to bring the background together as a whole and can be used to knock back elements that are too bright.

Add some pink Infusions pigment powder. The Infusions powders have walnut stain in them so you get a nice brown undertone to the colour.

And some black Brusho. I wanted to intensify the darkness at the bottom of the page and the Brusho does that nicely without completely blacking everything out.

Stencil some leaves with texture paste. I did check the position of the butterflies before doing this to makes sure I was going to leave enough space for them and to try to create a frame for them. 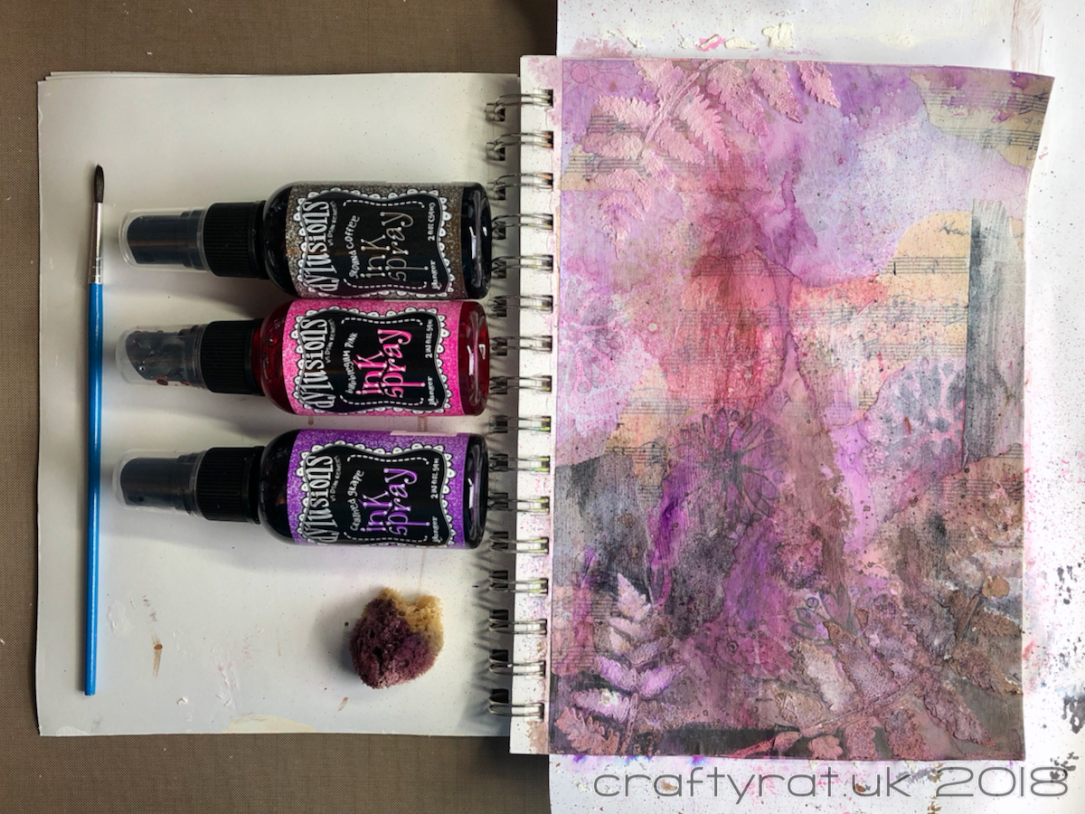 And add some more colour. Dylusions sprays for a bit of variety, though I used a paintbrush to apply them rather than spraying directly onto the page; it’s quite a small pad and I wanted more control.

Glue down the butterflies. More gel medium, very carefully applied as the wetness of the medium was enough to start reactivating some of the colour!

Outline the butterflies and leaves. The Stabilo gives a nice solid black when you go over it with a damp brush. The charcoal pencil smudges beautifully. The combination of the two creates a really nice shadowed outline. The top frond got a white outline in keeping with the dark to light flow on the page. I remembered that I needed to give the butterflies their antennae back, so I did it before I forgot again. And finally, some black and white gesso splatters. Again, emphasising the dark to light split on the page, with white splatters at the top and black at the bottom. I thought about adding a word or three to this page but decided that I liked it too much as it was to do any more to it. GESSO: Primed Creatives – Update us on your latest work in detail.