I’ve had this butterfly sitting on my desk since I cut it from a scrap of card I used to test the glitter kiss on. I have tried it against every background that came to hand and, in spite of it being a bold colour and shiny, it just didn’t stand out against any of them.

It was only when I was printing out some digi stamps that I happened to move the butterfly out of the way and put it on top of a repeated background print (of light grey turtles of all things) and suddenly I had found a background that showed it off like it deserved. Now, turtles was not really an appropriate grounding for a butterfly, and I apparently have no really light patterned papers in my stash, so I had to make one.

I tested out a couple of grey inks to stamp the scripty background, but of course it was the silver fox pigment ink that looked the nicest. The nice light pigment ink that doesn’t dry properly. Even if you heat set it. Even if you leave it for months (I have a card that I made over two years ago that still sheds ink when you handle it). I sprayed it with some fixative after heat setting it — and then opened every door and window to try and clear the air — and I’m hoping that will do the trick.

I decided I wanted some hearts under the butterfly, so I die cut some from a piece of pastel vellum. And then realised that there wasn’t going to be anywhere to hide adhesive on them. So I put those to one side and, in experimental mode, took another piece of vellum and carefully stuck some Stick It on the back before cutting some more hearts. And it worked beautifully. The Stick It makes the vellum ever so slightly more opaque, but you can still see the background script through it.

What didn’t work quite so well was adding Nuvo jewel drops to the two tiny hearts. I don’t know if it was the thickness of the drops or the temperature of the room or something about being on vellum, but it cracked. It doesn’t really matter in this case, it just adds a bit more texture, but it is frustrating.

The layout was inspired by the current CAS(E) this sketch challenge. I follow a few challenge blogs, but it’s rare I’m organised enough to join in on weekly ones 🙂 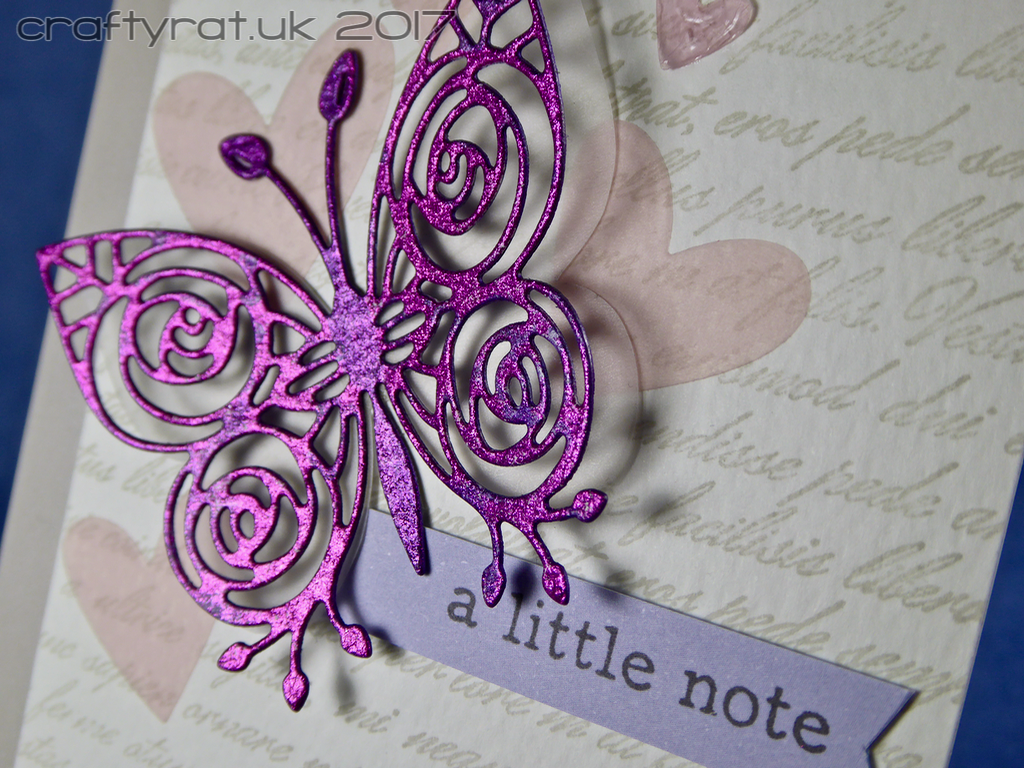