It’s Father’s Day today, so I get to make a card for my other half’s dad (only two months after his birthday. In keeping with the developing theme of making South Wales landscapes for him, this is a view of the beach by Port Talbot (technically there should be some buildings on the grass, but it looks prettier this way).

The landscape is loosely based on the main photo of the beach on the Wales beach guide; I just moved the viewpoint a bit to leave a clear area for the sentiment.

I sketched the main lines in using an Inktense outliner pencil — unlike the other Inktense pencils, this one isn’t water-soluble so it won’t bleed when you brush water over to blend the colours — and then built up the colour in layers, allowing each layer to air dry before adding the next. I could have used a heat tool, but it just felt like too much effort to get it out so I simply worked on a different area while the previous one dried.

Once it was all finished and thoroughly dry, I added some white detail to the sea and the fence and then die-cut the panel with a stitched rectangle. Then I added the heat-embossed sentiment. I nearly did the sentiment before die-cutting the image down, but then I realised that that would guarantee a wonky sentiment; it’s far easier to line stamps up with the edge of a rectangle than it is to line a die up parallel to a stamped sentiment.

Finally I stuck it flat onto a card base, making the closest thing to a one-layer card that I do without an awful lot of effort being involved. 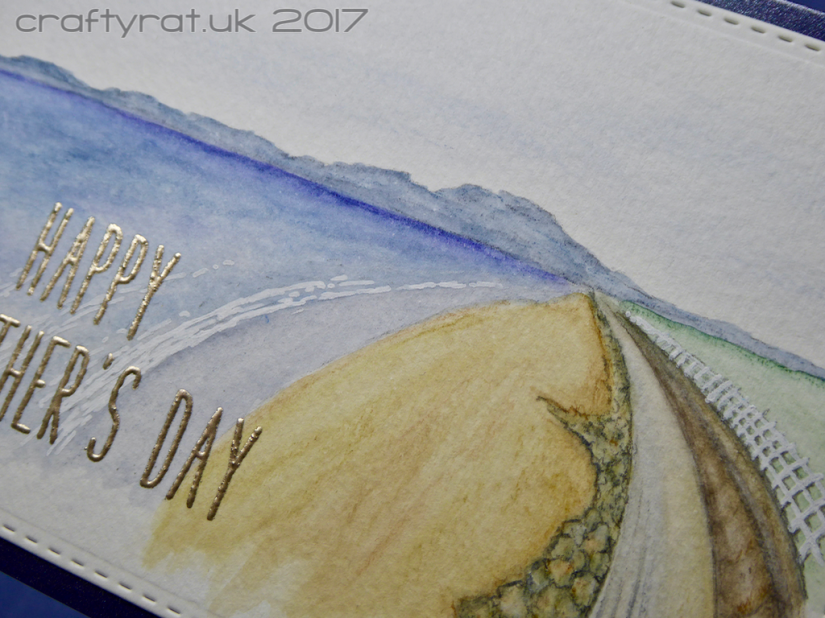