I wasn’t happy with the first incarnation of this panel. The end result was so far removed from my initial idea that I classed it as a failure, not a “throw it in the bin” failure but still…

Nancee disagreed and said nice things, including that it reminded her of “some old time Christmas ornaments/lights”. That comment sparked the vaguest hint of an idea which developed into the reworked piece here.

I had already decided that, whatever else I did to it, I was going to keep it black and gold; that was the foundation of the initial project and I didn’t want to change it completely.

The very first thing I did was to turn a few of the gold splatters into stars. More Christmassy already 🙂 I’d never liked the way the wires sat at the top of the panel and wanted to disguise it. I came up with the idea of creating a curtain-like drape. The pole is a piece of twisted cord stiffened with textile hardener, which I also used on the cotton for the drape (there was a lot of fiddling around with that before I was happy with the shape).

I created the curtain and left it to dry on my craft mat so that I could continue reworking the panel.

Next up, I wanted to add some decoration to the baubles. Not trusting myself to have a steady enough hand to use a brush reliably on a curved surface, I raided my stash and pulled out a tube of gold outliner. It was designed to be used with glass paints but would be just right for what I wanted. Many tiny dots later and the baubles were no longer plain.

While I had the outliner to hand, I used it to create the gold smears from the top and bottom of the panel; not what it was meant for, but it worked nicely.

As there would be a lot more gold on this piece, I thought I’d add a few extra touches of black: I found some little blue plastic snowflakes, painted them with black gesso and added them to the background. 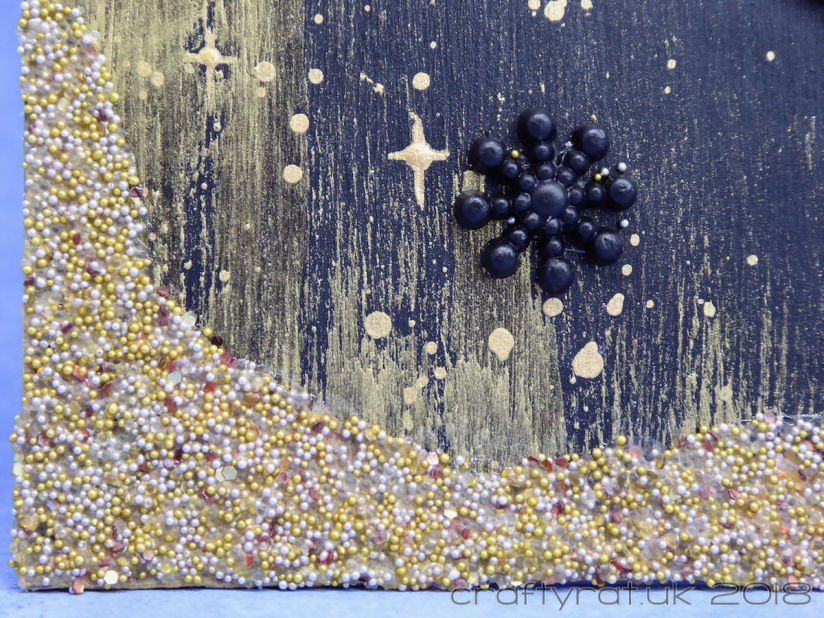 I wanted something more at the bottom to finish it off and help balance the drape. Beadazzles (a mix of micro beads and glitter) were used to create a golden snowdrift. And because I don’t trust micro beads to stay where they’re put, I added a coat of Triple Thick over the top.

While that dried, I returned to the drape. Time to add some colour. In fact, I ended up adding several layers before getting the effect I was happy with. I started using the same gold that the baubles were originally painted with, but that didn’t look right. Then I gave it a layer of Pebeo gold acrylic, which was better, but a bit bright. Finally, I added a coat of matte varnish, which gave it more of an aged feel. I also added matte varnish to the gold plastic roses at the ends of the curtain pole and to the beadazzles at the bottom; that way the baubles are the only things with a glossy finish.

And with the drape glued in place, the rework was complete. I am much happier with it now; no, it doesn’t have the simplicity I was aiming for with the original, but then I have always struggled with “clean and simple” in any medium.

And thank you once again, Nancee, for inspiring me.