My other half asked me to make him something with a rocket. The idea was that he would find a rocket design he liked and 3D print it and then I could paint it and create a background for it.

I decided to use one of the MDF monoliths in my stash; that way he could stand it on his desk or wherever he wanted and wouldn’t have to find wall space to hang it up. Of course, monoliths have two sides so, while I was waiting for him to find a rocket design, I made a start on the back side.

In theory, I could have just painted the back black or even continued the galaxy background I had planned for the rocket. But that would have felt unsatisfying. A monolith has two sides so it should have two different projects. The rocket was definitely going to be the main event, so I needed to come up with something that would stand alone, but not upstage the rocket.

So… gears. This is the kind of design I originally planned to create on the altered jar before getting sidetracked onto buttons and flowers, and I had a pretty good idea what to do.

I prepped the whole of the monolith with black gesso. Then I smeared varying thicknesses of crackle paste across one surface and left it to dry.

The crackle paste is white so I used some slightly thinned black gesso to cover it without hiding the crackles. I tried spraying some Dylusions ink sprays over it — it added some nice subtle colour variation but, as I later discovered, is very easily reactivated with water… even a slightly damp finger will lift colour from the surface. But I didn’t know that then so I carried on. The next stage was to grab a handful of gears from my stash and start arranging them. I also found the large planets gear, which I used as a focal point, and a few stars to continue the space theme that would later decorate the front of the monolith. When I was happy with the arrangement I glued everything down with 3D gel, which is very effective but does take a while to fully dry.

I used a selection of waxes on the cogs, mostly applied using a dry brush, with some thicker application done using a finger. I used the same waxes, along with a little acrylic paint, on the background.

Later on, when I realised the issue with the inks, I lifted some of the colour with a damp baby wipe. If it’s still a problem, I will give it a coat of spray varnish.

To avoid this becoming a too-long overly image-heavy post, I’ll stop now and show you the rocket tomorrow. 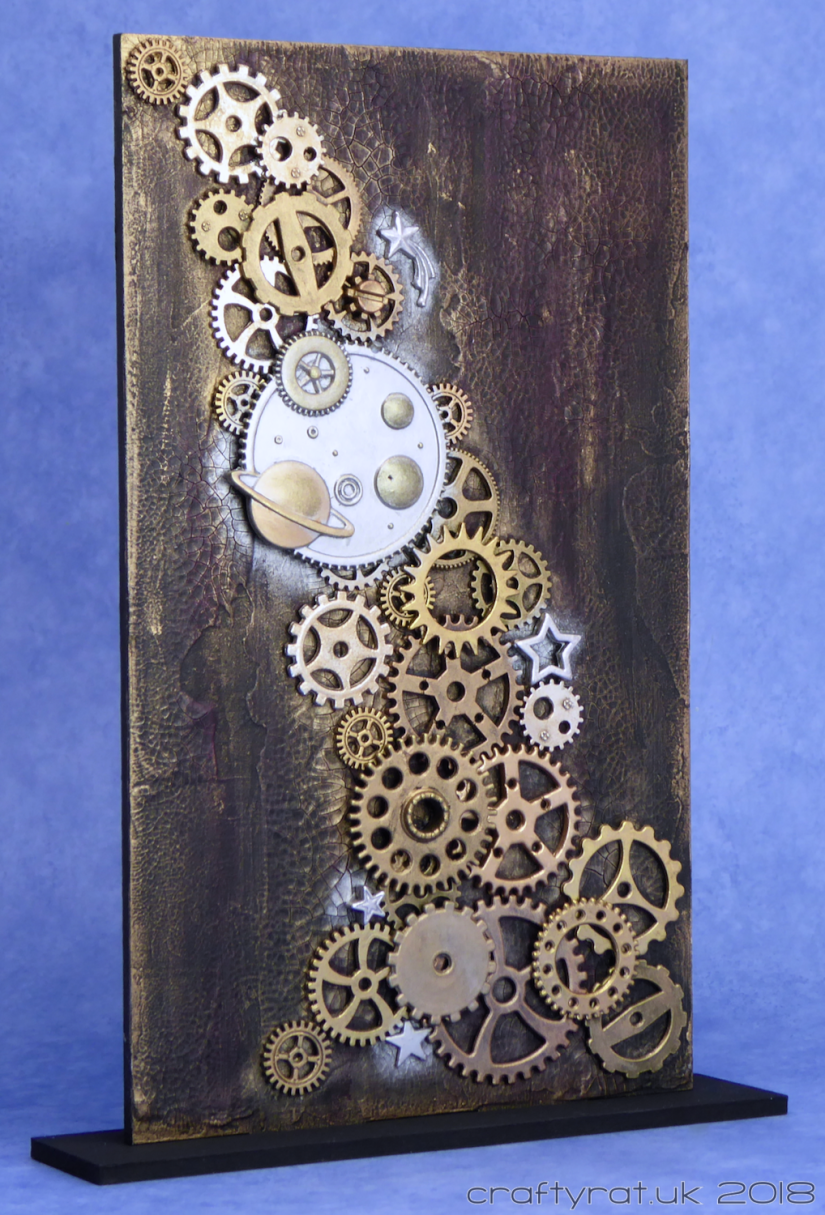 3 thoughts on “Rocket monolith: the back”

This mask blank has been floating around my craft room for an absolute age - finally was inspired to decorate it with a combination of gold paint and acrylic skins peeled off my palette. The gold side would have been crackled if only the crackle glaze had worked 🙄